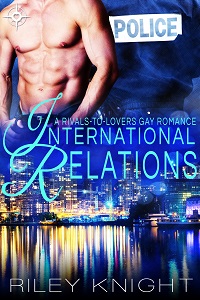 While Darren was away from his South Carolina home on a work visa, things changed so much politically that he realized that he could never really feel safe going back there. Which maybe wouldn’t have been a problem, except that he’d learned that there were places were he could be openly interested in a man and not have to be afraid.

The man he’s interested in is his partner on the Vancouver Police force, Danny. Though they have a rocky start, it doesn’t take long for the two of them to fall for each other, but can they get over Darren’s sexuality issues? His fear? And can Danny really love anyone after having his heart broken by his former fiance?

And when it seems like the only way to keep Darren safely in the country is for them to get married, will that ruin everything that’s building between them?