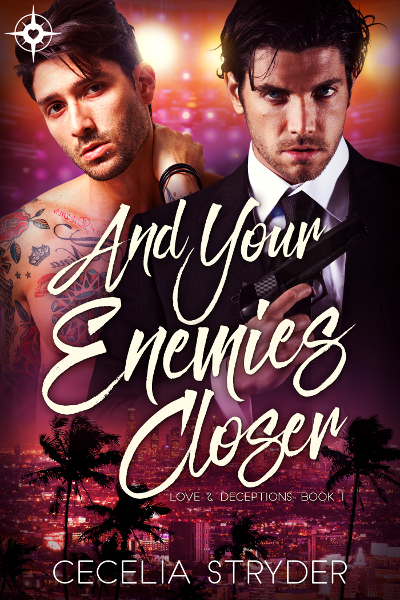 “No one knows the real Cori Archontis. All anyone ever cares about is that I’m the lead singer from that band.”

Five years have passed since Cori Archontis traded dirty money for fame and skyrocketed his band, Love & Deceptions, into stardom—five years spent drowning his past in narcotics, dating women to stay publicly closeted, and running from his mistakes. But Cori’s time is up. The Hollywood based crime syndicate who pushed him to the top of the charts is done waiting for him to pay back his debt.

And they’ve sent the most handsome man Cori’s ever seen to collect what Cori owes them—his life.

“No matter what, I’ll never let myself be like my father.”

The job is simple. Get in, put a bullet through the kid’s skull, and get out. Nero’s done it before. He’s been a member of crime syndicate The Mad Royals for twenty years, and as crime lord Caligula’s right hand man, he’s as unsympathetic as he is ruthless.

And it’s cocky, gorgeous, arrogant flirts like Cori that Nero hates most of all.

But there’s a vibrancy in Cori’s voice and a sincerity in his song that makes Nero’s finger pause before he pulls the trigger—and it fills him with dread. He’s been sworn off men for longer than he’s been a Royal, and there’s no way he’d ever stoop so low as to go down the path he followed.

But fate has other plans.

When two troubled pasts collide and expose a threat far more urgent than a simple debt, Cori and Nero’s lives are thrust onto parallel tracks. Forced to trust one another over the course of a single night while the world unravels at their feet and old scars open fresh, if they want to survive, they’ll have to learn to conquer their differences and find middle ground.

Or maybe somewhere even closer than that.